How long must I own a cookbook until I actually make a recipe from it? Well, in the case of "Deceptively Delicious" or "Doubly Delicious", let's just say a loooohhhhhhng time and leave it at that.

For those of you not familiar with Jessica Seinfeld's cook books, they are based upon the idea of incorporating pureed fruits and vegetables into recipes with the intention of hiding these good tidbits from unsuspecting little mouths. There's really not enough time today for a post about my own food and diet philosophies, but suffice to say for now, that I don't entirely agree with this plan.

Anyway, ideas such as adding sweet potato purees to meals like mac and cheese or tomato soup, and carrot purees to meals such as Chicken Parmesan or corn bread make sense to me. And since I already had a beautiful orange cauliflower and a couple of lonely lemons at home, I thought I would try the Cauliflower Gratin and Lemon Poppy Seed Cake. (I should note that I actually didn't have carrot puree as the recipe called for, and instead used a sweet potato and butternut squash mix for both).

My verdict? Quite good. I'd use the recipe again. Although I don't eat cauliflower that often, and it wasn't sooooo good that I would go out and buy a cauliflower for the distinct purpose of recreating it really soon. 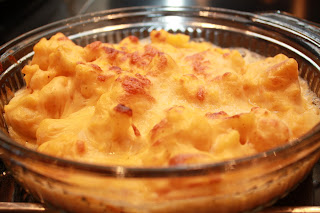 Lemon Poppy Seed Cake: Good. Had better. Had worse. But I must add that my daughter did try a piece  and liked it. She happens to be one of the pickiest eaters I know. 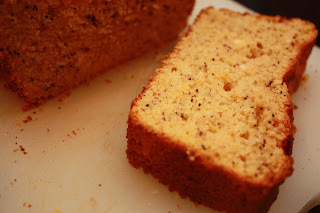 But here's the interesting thing about both: You'd honestly never know there was sweet potato and butternut squash in either. For reals. Try it!
at October 25, 2011