I'm here.....but it was just one of THOSE weeks for me. Our home computer crashed and work was incredibly busy. Last night I rewarded myself by indulging in watching a few "Real Housewives"espisodes I had PVR'd, while drinking red wine and eating popcorn (and maybe even a few Halloween treats of my daughters) ;)

Of course, this happened after the crazy weekend I had of sneaking around and arranging/doing my latest "home project"- which I know you (read: Syl) are all dying to know about ;)

Before and After photos are so much more effective if there is a before photo (kind of obvious) but I don't have great photos for the whole thing because quite frankly, I forgot. Also, the Friday that I had hired my "handyman" to do some work around the house was a little bit of an all out gong-show, consisting of an entire THREE trips with my daughter in tow to the local Home Depot to pick up supplies such as drill bits, screws and..................................................wood filler. Why you might ask? Well that would be because the first time one shelf was put together, it was put together backwards and since there were nails in the space now facing OUT, we had to do something about it.

All is well in the end and, like anything I learned a lesson: Research the company/person doing your handy work a little more in-depth before allowing them to put holes in your walls.

Everything did work out ok, and here are the results:

This first photo is simply of the wall unit that was put up. Previously, there was a piece of art hanging there and I wanted/needed more storage around the computer nook of the house where so many things get dumped. I'm not sure what I am going to put up there, but was thinking about my cookbooks, camera, and maybe a little "quick grab"basket for keys and such. 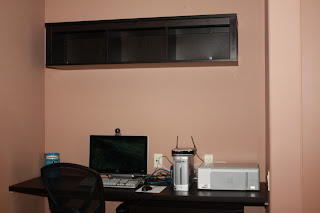 I realize it's not that exciting of a photo, but when it's all fixed up (and I have my new mac computer here instead ;) I will take another photo for you for the official "after" photo.

The next project was putting up a medicine cabinet in our master ensuite, and getting new bedroom furniture. We had been using the same crappy stuff for about 6 years, and given that it was our 5th year wedding anniversary this past week, I thought it was perfect timing. 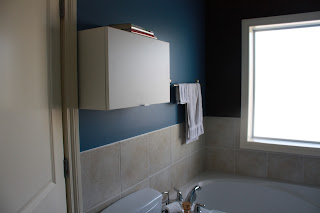 For some reason, this house was never built with a medicine cabinet...

The before here is me organzing all of the drawers on our bed from our crappy white ikea unit. 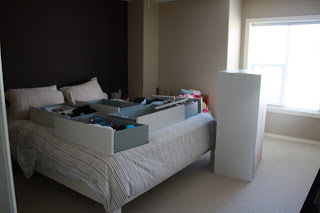 And the after (while not 100% finished) is a peaceful, warm room. 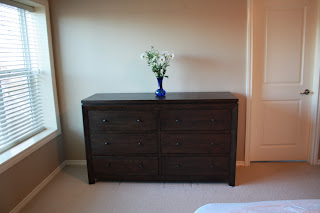 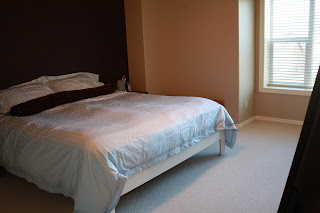 Previous to this, we also had a television in our room and I took it out when I put the "new room" together. It's bad "feng shui" to have a TV in your room and it really does make it calmer. But not sure how we feel about this long term. I know hubby wasn't too keen on not having a television in the room, but we'll see. How many people have TV's in THEIR bedrooms? Just curious...

Well there you have it - it seems like not very much happened but I had been shopping for new sheets, duvet covers, furniture, picking up items here and there and stashing them, organizing help, cleaning out and organizing drawers, clothing, and bathroom shelves as I went along. The truth is, a lot of the work was not the surface stuff....but now that's all done, I am happy!!

The next big project will involve hubby, as it's a massive undertaking: our storage area in the basement. Nothing sexy about that!

Until next week my lovely reader (s) ;)