...Cauliflower Pizza Crust that is. Well ok, it's not that bad, but it's not that great either. And if I am going to eat pizza, it's sure as hell needs to taste like pizza.

I consider myself to be an open minded person and when I saw a few recipes for "Cauliflower Pizza Crust" floating around blog-landia, I decided to give it a try. After all, it is the Year of Pizza.

The recipe is quite simple and if it weren't for the cheese in the crust, it would have been unpalatable. Not because I don't like cauliflower, but because when you are eating "pizza" and dressing up a crust with the same things as you would a regular pizza, you cannot help but expecting the thing to taste like pizza. (Maybe that's why I hated Kale Chips when I first tried them. Of course I "knew" they wouldn't taste like Doritos, but I was expecting something a little better. "A wolf in sheep's clothing" comes to mind...lol)

Anyway, contrary to what the title says, try this at home if you want. Just don't expect it to taste like a pizza crust, and you may enjoy it. But - if you are making a pizza while not expecting it to taste like pizza, what's the point? 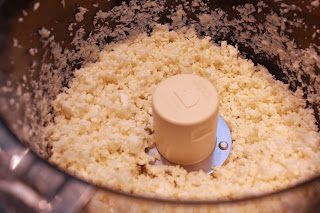 Using a food processor, you "pulse" the cauliflower until it looks like this. 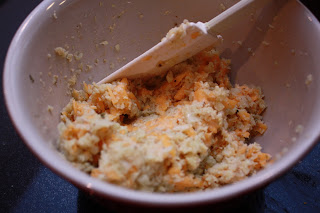 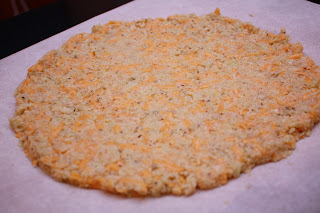 Spread out ready for baking.... 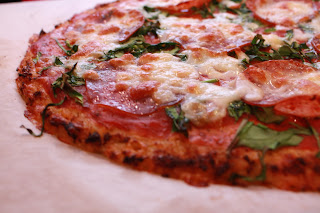 The recipe that I used for this (should you ever decide you want to try it) is found here at "Eat, Drink, Smile" http://www.eat-drink-smile.com/2011/04/cauliflower-crust-pizza.html