It's been a few days since Calgary participated in the Calgary Marathon event. All the dust has settled and some of the excitement of the day has worn down. Participants were sent copies to purchase of any photos that were shot of them, and most of them (of me) were pretty bad! It reminds me of that hilarious picture about the girl running....and let's just say that sums up what I felt about the photos. (Make that "what I KNOW I look like") 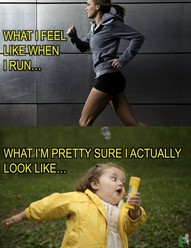 Anyway, this always leads to the "what next" question. For me, "NEXT" is running Melissa's (another half marathon) in Banff. It's the 33rd year for this road race in the beautiful mountains of Banff. It will be quite a challenge for me since I only walked this last half (and I think the course is a lot harder). But that's what's next for me. I have approximately 4 months of training for that one.

My friend who ran the Marathon sent her update about what is next, and she has some exciting plans that don't have much to do with running. Part of what she didn't like about the whole training for a marathon was that she was constantly hungry and didn't feel like she had the same control that she had before. Your body needs a LOT of fuel for something like that, and it can be hard to "carb up" when your mind is like "no!!!! put that pasta DOWN". Or, if you are like me - I often feel "entitled" to eat something after a long workout or walk/run because "well, hell, I have earned it"!

Anyway, we all know that to get in shape and lose weight, that there are two components: eating well and exercising. But here's the question: What do you guys find is the harder one? Finding the time to actually exercise and push yourself appropriately, OR sticking to a healthy eating plan? I think you'll know what my own answer is lol. Now obviously, when you are training for an event - you absolutely need both (although I have known people who drink and smoke excessively throughout marathon training) BUT I have heard quite often that diet is 80% of weight loss, not exercise.

Anyway, just curious as to what you guys think about this one. I know it's apples to oranges because eating well by itself won't help you to train your body for a marathon, but just wondering if people find exercise or eating right easier?
at May 31, 2012