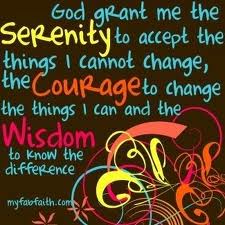 There are a lot of things that parenting does to you (we won't get into the physical aspects of it today!) but one thing that it definitely does, is it makes you want to be a better person - that improved version of yourself. You want this because if it's one thing children do - it's picking up on EVERYTHING you are doing...even if you don't think they are watching....good OR bad. And isn't it easier to teach kindness or honesty by example than having to try to explain what it should look like? I'm always thinking about the BIG ticket things I want my daughter to "get". Like being true to herself....like being a good friend....like not getting incredibly frustrated when things don't go the way they are supposed to...like speaking up for herself or others when necessary...like how to be naturally thin and never having to diet (and I'm NOT even joking).

As a parent, I think you are always (ok - MOSTLY) concerned with what your child is learning from you. I mean it's a lot easier to flip the bird and introduce some colorful new words to your child's vocabulary when some asshole cuts you off in traffic. But because we know they're in the backseat watching us, we don't do that. (Unless we actually forget that they are back there watching us. In which case we do flip the bird, curse, and then once we remember they are there, pretend like we said "truck" and not what we actually said). And because we know they are watching us (and constantly asking "why?") and because we want them to learn good character, we need to demonstrate it. I personally think that I have become a better person thanks to becoming a mother. Among being more aware of modeling behaviours I want to see repeated or learned, I have also learned to become more patient, to not take things as seriously as I once did, and to also respect and appreciate my own parents more!

The other day (after running into an old friend who I hadn't seen in years) I got to thinking just how much we mature over the years. I was thinking back to some of the stupid things I did, said, wore, or ways I styled my hair....lol. I'm kind of sad when I think back to this because there were some moments that I can easily recall where I wasn't the friend I should have been (like to this friend I ran into), or didn't stick up for my own beliefs because I wanted approval by someone.

What I wish I could have told that younger version of myself years ago is that 'your friends are some of the most important people you will have in your life and you need to choose them over other things (like boys)' and 'you need to be true to yourself' because well....you just need to. I hope that my daughter learns some of these lessons sooner than I did and I hope that I can teach her the things I think are important for her to know. It's an overwhelming thought - that you are responsible for SHAPING LIVES! Seriously! But you can't think of it like that. You just have to take it day by day and during each of these days, simply do the absolute best that you can at modeling the behaviours that you want your child to pick up.

So after running into this old friend and reflecting about how we mature and change over the years, I realized that we simply have to be forgiving and kind to ourselves and to others - because at the end of the day, we are always doing the best we can at the moment...from where we are, from what life lessons we have learned to date. Because of this, I look forward to continuing to mature and age (not so much the wrinkles and the incontinence though). I feel like I become "more of who I really am" as I age. I guess it's kind of like becoming more comfortable within your own skin - which is a really great thing.