As you can see from the photo, I only added a weeeeeeee little bit of kale today. I was worried that it was going to taste too different than spinach so I am slowly going to do greater amounts of kale OR swiss chard over the course of the week. (I was at the farmers market today and did buy some swiss chard). To be fair, I think I would have to try a side-by-side smoothie with the same ingredients and only change the greens to see just how different the smoothies taste as a result. I might do that later.

The smoothie was OK - not my fave. It didn't seem quite sweet enough. Maybe if a little extra mango or pineapple was added it would have helped. Not making this one again. 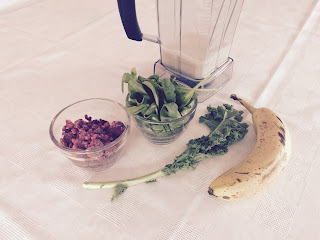 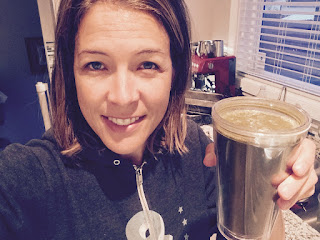 Yesterday was kind of a crazy day as my daughter had an MRI. It was a jaw scan done because of her juvenile arthritis. The whole thing lasted about half an hour and was quite intense. Because it was a scan of her jaw in particular, for part of it she needed to bite onto something that would keep her jaw open, and during the last 10 mins she was injected with dye (contrast agent) so that they could improve the visibility of the scan.

It was our first experience, and most of all I was surprised by how noisy it was!! Here's a quick youtube video which demonstrates a bunch of the different sounds we heard during the scan: https://www.youtube.com/watch?v=xS_V_OgeX-U To ask a young child (and an anxious one at that) to basically be statue still while shuttled into a "tunnel" for half an hour while listening to extremely loud noises (as well as given a needle and having to breathe through a weird device) was a lot. But she did great, so it was in fact a small victory for her. Also, I must say that we are so lucky here in Calgary (and Alberta) to have the Children's Hospital. I know that many people have to travel long distances for pediatric care, and I have nothing but gratitude for having the hospital just minutes away.

Finally, we also had my energetic little niece over to visit, so it was quite the day! (Nice clothes, little stinkers)! 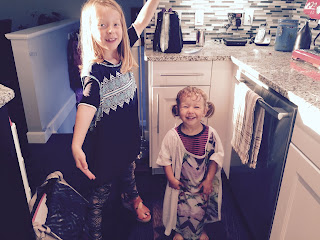 For more information on the challenge, go to: www.simplegreensmoothies.com/30 They will email you the recipes, but you can also find them by following their Instagram account.
Banana Razzmatazz - ** (2.5 stars!)