Today I found myself contemplating which green smoothie might be best for hangovers? One of the green tea ones? One of the water based ones? This wasn't for me of course, but for my husband who was perhaps taking his character too seriously. (He was Allan from "The Hangover"). Currently he's sleeping it off downstairs, the lone wolf in the wolfpack. At least he won't be waking up to a jungle cat in the bathroom https://www.youtube.com/watch?v=xlrqaAjBwS4.

The host and hostess for this party basically work ALL YEAR LONG putting everything together. The amount of effort put into it is pretty amazing. We're talking full-on graveyard out front, full size adult 'operation' game, projection onto screens which look like zombies and trying to break through, photo booth, and soooo much more...All over the house. It was crazy. I just wish I had taken more photos. Here are a few of the ones I did take last night, before I talk about the smoothie today: 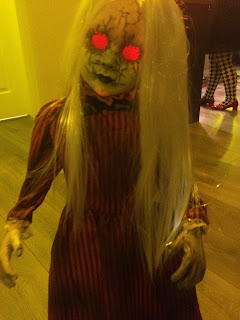 This is a creepy doll that wanders through the house saying things like "don't worry, I won't hurt you"! OMG 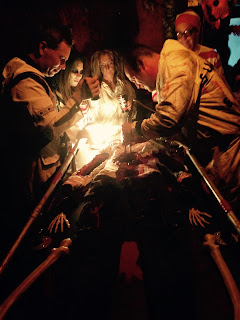 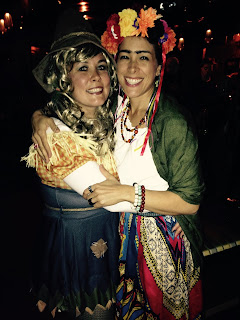 A photo of me as Frida Khalo and one of my besties dressed as a scarecrow!

Today I tried a new recipe called "Kale n' Cherry". Its the first one I tried with cacao powder - and I also used kale only. There's a place at the Calgary Farmer's Market called The Cherry Pit and they often have great washed and cut produce if you're feeling lazy. They also happen to have a great washed kale that I sometimes get. I used it once to try 'kale chips' which were pretty good actually. Anyway, this one was made to be a single serving since (as I mentioned) Allan is still sleeping. If he's lucky I may make him a smoothie with the green tea I have chilling in the fridge. The smoothie may be the best thing for a hangover.

Anyway I liked it ok...didn't love it. I am not sure I want or need cocoa in these smoothies. When I want the taste of chocolate, I am hoping for something a wee bit sweeter. I would rather have a piece of good dark chocolate and a regular fruit/kale smoothie. Not combined. Just my own preference.

Hope you all have a great Sunday. Not sure if "Allan" will be up to drinking wine all afternoon...might be lone wolfing it myself....

For more information on the challenge, go to: www.simplegreensmoothies.com/30 They will email you the recipes, but you can also find them by following their Instagram account.