Yesterday I had an appointment with a Naturopathic Doctor (ND) regarding my daughter's arthritis. I wanted to get a complete picture of treatment options before any decisions were made. It was quite helpful and I felt really great about it...but here's the thing...when deciding on what what to do, it can be tricky if one parent feels differently about a treatment option than the other. I think it's fair to say that I am more open to some of the naturopathic options, where my husband isn't as much. I believe we have come to somewhat of a middle ground on this though.

When my daughter was first diagnosed with JIA almost two years ago, we took her to a naturopath and at that time did some food sensitivity testing. However, we didn't adhere much to the plan that the ND had set forth. Instead, we basically did what was recommended by the hospital, and the drugs and joint injections seemed to work well for her. It felt like the right thing to do at the time and I still believe that it was the right thing to do. They wanted to "hit" the arthritis so to avoid further damage and I am glad we did. However, now that most of it is under control, I am more interested in learning about the causes of it and working on that, rather than simply treating the symptoms: the inflammation.

One thing we are going to do is adjust her diet (based upon the findings of the food sensitivity test); change the probiotics she takes; include some alternative therapies that I will talk more about as we go along; and schedule the joint injection. I am hoping that the injection can take place in about 3 months, giving us some time to allow the naturopathic route to work, while at the same time, not leaving the injection too long if nothing is changing.

The dietary changes include an elimination of dairy and citrus fruit. These two categories show up as issues for my daughter, so we're opting to get rid of them for the time being. When we attempted to remove items from her diet back in 2014 (dairy and citrus as well as gluten and nightshade vegetables) I tried almost every 'non-dairy' milk there was out there, only to have it poo-poo'd by my picky little eater. It's one thing to start eliminating foods from a non-picky eater, but something else to attempt this with a picky one! Part of the reason for not maintaining the diet plan before was the sheer overwhelm of what to feed the kid!

Anyway, almost two years more mature, my daughter was more understanding of the reasons we are going to do this, and therefore slightly more willing. To make this more fun, I decided to do a blind tasting of a few types of non-dairy milks. Here are a few pics of this little "experiment".... 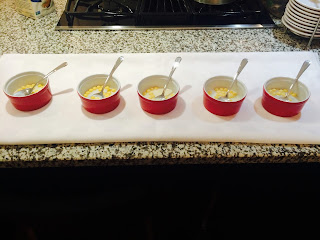 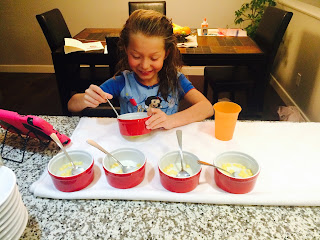 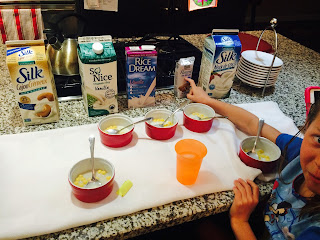 Part Two of the Experiment:
Guessing which milk belonged to which dish 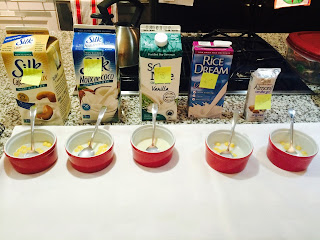 And the winner was.....Almond Milk (sweetened) with Soy as a close second. I think will stick to almond milk (Silk brand I am told is the best) as soy has too many hormones (a wise person just told me).

So that's that. For now.