"It Was Me All Along"

I recently read a book entitled “It Was Me All Along”, written by Andie Mitchell. It was recommended to me by one of my best friends and is a memoir about one girl's struggles with binging and restricting; difficult relationships with others and with herself; about how food had so often been used for comfort in her life; and coming to a point of ease within her body after years of struggle. 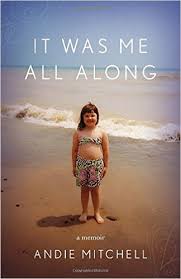 While I personally have not had as tumultuous of an experience of binging and restricting as Andie has, I have definitely done my fair share of both. It seems that so many of us women struggle with weight, our body image, and this cycle of dieting and overindulgence. Food addiction is especially complicated quite simply because we NEED to eat. EVERY. SINGLE. DAY. Food is all around us. And if the relationship we have with food is unhealthy, there is just so much opportunity for it to be abused. If you're a smoker or addicted to drugs, pills, sex, or whatever the hell else...it's just not as obvious as a food/weight issue and that makes things even MORE complicated. The 'icing on the cake' as it were, is our culture. The expectations to be a certain way, look a certain way, act a certain way. Gawd - I am exhausted just thinking about it all.

I admire Andie's courage in writing such a personal story, and there were two quotes from the book that stood out to me and that I would like to share with you here:

“Maybe the difference between a standard meal and a great meal has as much to do with its taste as it does my perception, my energy in devouring it. The food had not changed. My perception of it had." (pg. 142/143)

I believe this wholeheartedly. Too often we eat while doing something else (watching TV or on the computer, standing or in our cars) or we eat out of habit without any real thought as to the taste, texture, and aroma. OR, maybe you have always thought about food less as nutrition for your body, and more as comfort or something to tame your boredom. Either way, in Andie's case she as the "eater" had changed. The food had not. Who are you as an eater?

“What I’d learned is that enjoyment and satisfaction can’t always be quantified as energy input and output. Treating myself to foods and meals that might have put me in a caloric surplus did not make me fat, as I’d once feared they would. Intellectually, I always knew that all food was fine in moderation, but now the practical reality finally clicked”. (pg. 216)

YESSS. HELL YESSSSSSSSSS! Guys, I will never ever recommend that someone completely cut out all foods that they find enjoyable in the name of healthy eating. Life is too short! Stop calling treats “bad” and stop calling them "cheats". It’s about moderation. If you're eating an overall well balanced diet and taking care of your body, occasional treats are not cheats - they are gustatory enjoyment which is a part of living a great life! I know it's complicated because some people struggle with an "off" button to certain foods, but I simply mean that we cannot always eat "perfectly" or "clean" or "without surplus". There is a balance - only we can find it.

The takeaway of the book for me was that we really all struggle around these issues of food and body image. Some of us struggle more so than others, but we all do to some extent. It's literally a lifelong journey of finding what works for us, and living in that balance. The faster one can figure this out, the easier their life will be.

I enjoyed the book -- it's an easy read and I believe that you will be able to relate to Andie in some capacity. Please let me know what you think of it.
at October 28, 2017 No comments:

Email ThisBlogThis!Share to TwitterShare to FacebookShare to Pinterest
Labels: Andie Mitchell, binging and restricting, Body Image, eating habits, It was me all along, trusting your body

WTF "What the Health"?

While at the dentist today, I came across an article in the New York Times that I thought was excellent, and I would like to share it with you. Ever since I watched the ‘documentary’ (and I use this term loosely) called “What the Health”, I have wanted to write a blog post about why I found the documentary to be poorly done. But I never was able to piece my thoughts together as well as Jane Brody has in her article:


If you know me at all, you’ll know that I absolutely support animal rights and believe that if you choose to eat animal products, that you have a moral obligation to ask where your food comes from. But for many reasons, I choose not to eat vegan – and it makes me so mad when ‘documentaries’ like these that are lacking in accurate information are released to the general public who may take it at it’s word. This article by Brody outlines some of these inaccuracies.

I appreciate anytime people move to  a healthier lifestyle and those who choose not to eat meat for ethical reasons. For many people however, this way of eating is not always a good one to adopt. I will also take this opportunity to point out that there would be an amazing impact made by meat-eaters if they chose not to eat meat for a day or two a week, and/or didn’t eat animal products every meal.

Anyway, here is the article – I encourage you to read it especially if you have watched “What the Health” and were thinking "What the Fuck" like I was.

Excerpt: "Such is the case with a recently released Netflix documentary called “What the Health” that several well-meaning, health-conscious young friends have urged me to watch. And I did try, until I became so infuriated by misstatements – like eating an egg a day is as bad as smoking five cigarettes, or that a daily serving of processed meat raises the risk of diabetes 51 percent — that I had to quit for the sake of my health. While the film may have laudable goals, getting the science wrong simply confuses the issues and infuriates those who might otherwise be supportive."

Also, if you wish to 'deep dive', a bit - here's a well written article by Robb Wolf that reviews the movie in more detail than I would ever care to...https://robbwolf.com/2017/07/03/what-the-health-a-wolfs-eye-review/

But before I sign off here, I'd like to say that I think it's great if people are vegan or who want to become vegan (and it's done right). I completely respect people's food choices. It's super frustrating that there is so much conflicting data out there when it comes to food research -- but that's just the way it is -- and the fact is that one has to do a lot of experimenting with their own bodies to find what works for THEM. My issues are with the twisting of data, crappy science and people using titles or fame to misconstrue facts - vegan or carnivorous alike.

EDIT: Today (May 27th) I came across a well written article about What the Health and wanted to add it here for additional information:https://www.vox.com/science-and-health/2017/7/25/16018658/what-the-health-documentary-review-vegan-diet
at October 11, 2017 No comments: